Step 10 refers to the tenth step first described in the “Big Book” of Alcoholics Anonymous. This step was devised as a step to keep people in check once they are going through the process of recovery and stopped drinking and using.

It’s often called “taking a personal inventory”. The inventory system is very similar to cognitive behaviour exercises (CBT), the only different being the use of language is very much routed in morality, in fact often throughout the literature the Seven Deadly Sins can be observed, this step 10 inventory is no different.

Some models of the step 10 are worded incredibly old fashioned and really get you to check for god’s will, which is of course a covert way of showing that he secretly loves you, despite often cloaking it with obstacles such as disordered states, poverty, social exclusion and injustice.

Despite being an easy target for criticisms, this step does promote the idea that recovery being an on-going process rather than a short-fix. One other empowering aspect of this step is that it does place a person firmly in the driving seat of their own life. A message that should be ubiquitous throughout all programs of change, you can be responsible! 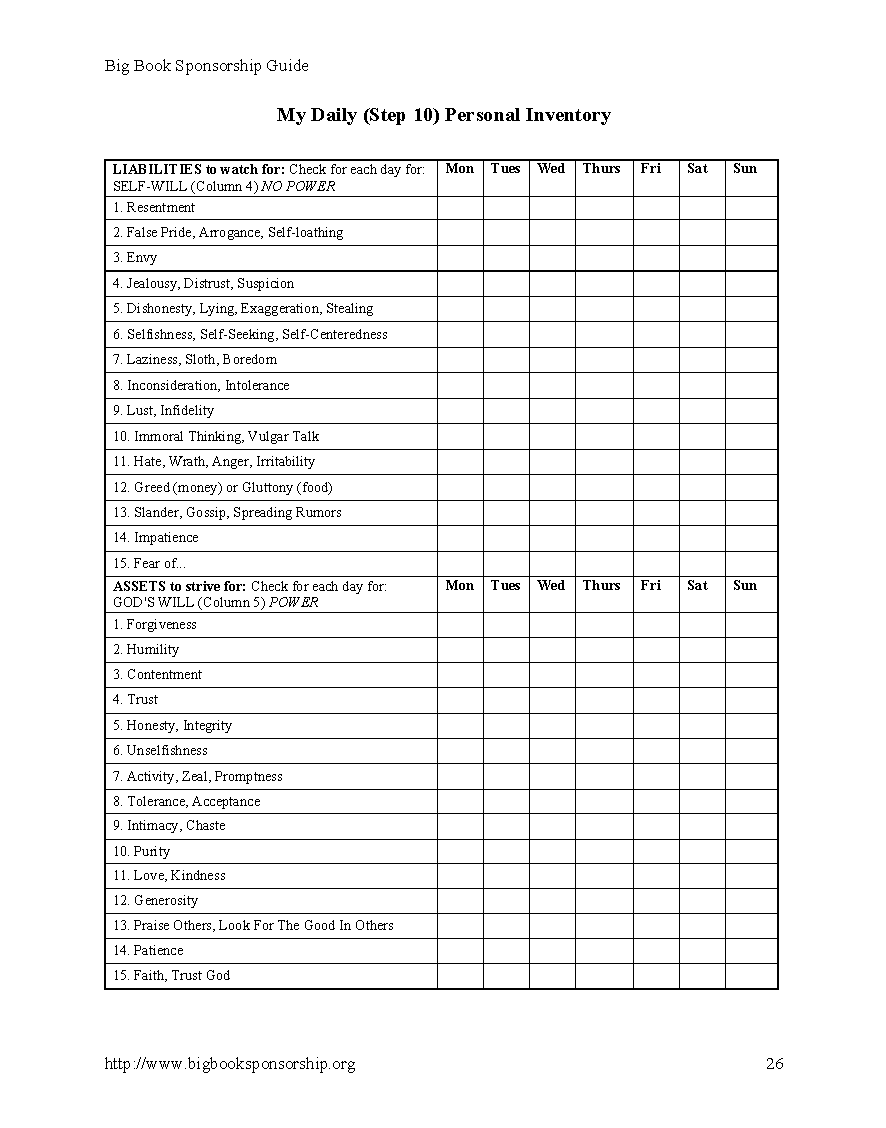 Mr Dylan Kerr Addictions Counselor Bachelors in Clinical Counseling (Hons) Advanced Certified Addictions Therapist Member of the British Association for Behaviour and Cognitive Psychotherapist Member of the Federation of Drug and Alcohol Practitioners HeDip Health-care HeDip Psychology of Addiction Dip Counselling Diploma in Arts Therapy Diploma in Transactional Analysis CSAT III Dylan Kerr is a Certified Substance Abuse Therapist who is qualified in Counseling, Psychology of addiction from Leeds University and Healthcare from Birmingham City University. Dylan Kerr has been a senior Therapist at the River Rehab, Lead Therapist at Lanna Rehab in Chiang Mai and Head Counselor of Hope Rehab in Siracha. As well as working in Thailand for 7 years, Dylan has also been the on-tour counsellor for the the Rock band ‘The Libertines’. Dylan is now resident counsellor at an Asian rehab. Dylan has experience of working within the music industry supporting acts in therapeutic needs. As well as working around the world Dylan has over 13 years experience delivering substance use disorder treatment at various agencies around the UK. He is skilled in motivational interviewing, CBT, RET and guidance around 12 step philosophies. Dylan has worked with a broad client base and establish the rapport needed to effect change and sustainable progression. Dylan wishes to start this blog to help educate people on his observations within this field and debate the nature of work in the addictions field. View more posts